The concept of biodiversity goes beyond identifying the variety of species that may occur within a given area. Rather, it recognises the inter-connectivity and interdependencies that occur between different species and their habitats. For example, a negative impact in the local environment could adversely affect a much wider ecosystem. Many ecosystem services are provided by biodiversity such as pollution control, flood mitigation, carbon sequestration and sustaining agricultural production. The conservation and enhancement of biodiversity and natural heritage is therefore an integral part of good environmental management and sustainable development.

There is a great diversity of natural and semi-natural habitats in Athy, ranging from its hedgerows to groups of trees, grassland areas, and riparian habitats along its river and canal corridors. It is considered that the natural heritage of Athy, while somewhat underutilised, is a critical asset for the town which, when taken in combination with its built heritage, has huge potential, if appropriately and sensitively developed, to improving the overall wellbeing and quality of life of the town’s residents whilst also providing critical economic and tourism opportunities.

The natural environment also plays a vital role in helping communities adapt to and mitigate the negative effects of climate change. Accordingly, the policies and objectives set out in the Plan seek to protect Athy’s existing habitats and promote the sensitive incorporation of new green infrastructure features into the existing urban fabric of the town alongside new developments, in order to foster greater biodiversity, whilst also utilising such green infrastructure for climate mitigation purposes.

Athy boasts two significant designated sites which contribute greatly to its character. The River Barrow is listed as a Special Area of Conservation (SAC) and the Grand Canal is designated as a proposed Natural Heritage Area (pNHA).

Special Areas of Conservation (SACs) are legally protected under the EU Habitats Directive (92/43/EEC) and are selected for the conservation of Annex I habitats and Annex II species. The River Barrow flows southwards through the town and forms part of the River Barrow and River Nore SAC (Site code: 002162). The site is of considerable conservation significance given the occurrence of good examples of habitats and of populations of plant and animal species that are listed in Annexes I and II of the E.U. Habitats Directive respectively. Furthermore, the River Barrow is of high conservation value for the populations of bird species that use it.

The Barrow Line of the Grand Canal is a man-made waterway linking the River Liffey in Dublin with the Shannon at Shannon Harbour and the Barrow at Athy. The Grand Canal system is protected under national legislation by way of its designation as a proposed Natural Heritage Area (pNHA) – (Site Code: 02104). It runs through the town and intersects with the River Barrow 500 metres south of Cromaboo Bridge.

The Grand Canal pNHA comprises the canal channel and the banks on either side of it. The canal supports important habitats such as hedgerows, tall herbs, calcareous grassland, reef fringe, open water, scrub and woodland. Diverse ranges of species use the site including the Annex II species such as otter and white-clawed crayfish. The ecological value of the canal lies more in the diversity of species it supports along its linear habitats than in the presence of rare species. Associated canal structures and buildings also contribute to the setting and historic character of the canal.

The River Barrow and the Grand Canal have the potential to play a key role in the regeneration of the town. This Local Area Plan aims to realise the full potential of these waterbodies as local and national amenities by providing supporting policies and objectives which seek to enhance walking/cycling route options connecting with residential areas and other public open spaces in the town and further afield (including the Barrow Blueway project) without compromising the integrity of these designated sites.

The natural heritage features of Athy can be described as its green infrastructure network. This network supports native plant and animal species and provides corridors for their movement, maintains natural ecological processes and biodiversity, sustains air and water quality, protects from flooding and provides vital amenity and recreational spaces for communities. This Plan takes a proactive approach towards planning and managing the green infrastructure network of Athy by seeking to maximise the benefits of the multi-functionality that such natural heritage provides. In protecting and enhancing the green infrastructure network of the town important amenity and recreational spaces can be provided for communities, thereby contributing to the health and quality of life of residents and also allowing for increased climate resilience within the town in the years ahead.

It is important to note that not all pieces of green infrastructure perform the same functions and not all are of equal value. For example, a grassy strip between a footpath and the road surface provides a level of water regulation by providing a pollution control and a green space for excess water to soak into and it also provides a very limited habitat for plants and insects. Conversely, a riparian wetland would have a much greater capacity to absorb water, provide pollution control and would support a much greater range of biodiversity. To be effective, any project identifying Green Infrastructure must recognise these differences in value and distinguish what are the most important components.

Under Article 10 of the EU Habitats Directive, planning and development policies must endeavour to conserve and sustainably manage corridors and stepping stone habitat features. As part of the preparation of this Plan, Kildare County Council commissioned a habitat mapping and green infrastructure survey for Athy in 201821. This report identified and mapped the various habitats and green infrastructure areas in the town. These maps are a valuable tool in the future planning of the area and also provide information for the general public and community groups.

The survey employed the Heritage Council’s habitat classification system and recorded habitats by features according to their ecological value (see Table 9.1). Map 9.1 provides detailed information of the location and distribution of the various habitat types listed below.

Table 9.1: Extent of habitats in Athy when grouped by ecological potential

As noted in Table 9.1 the dominant environment within Athy is categorised as being of low ecological value (i.e. built environment, improved agricultural grassland and amenity grassland). However, the habitat mapping has identified six main routes of green infrastructure (local biodiversity areas) in the town. These routes are named, as outlined below, with regard to their most noticeable features and all are connected to the largest and most important piece of green infrastructure and ecological corridor – the River Barrow. These routes are also considered to constitute ‘local biodiversity areas’ and form a critical component of the town’s Green Infrastructure. Map 4: Green Infrastructure illustrates key aspects of these areas which should be protected.

It is critical that these areas are safeguarded and given the opportunity to increase their extent and ecological function within the town by retaining links and supporting connectivity within the network. In addition, stepping stone habitats, including scattered trees and parkland as well as amenity areas within housing estates, further enhance the connectivity of habitats, and in turn, promote biodiversity across Athy. 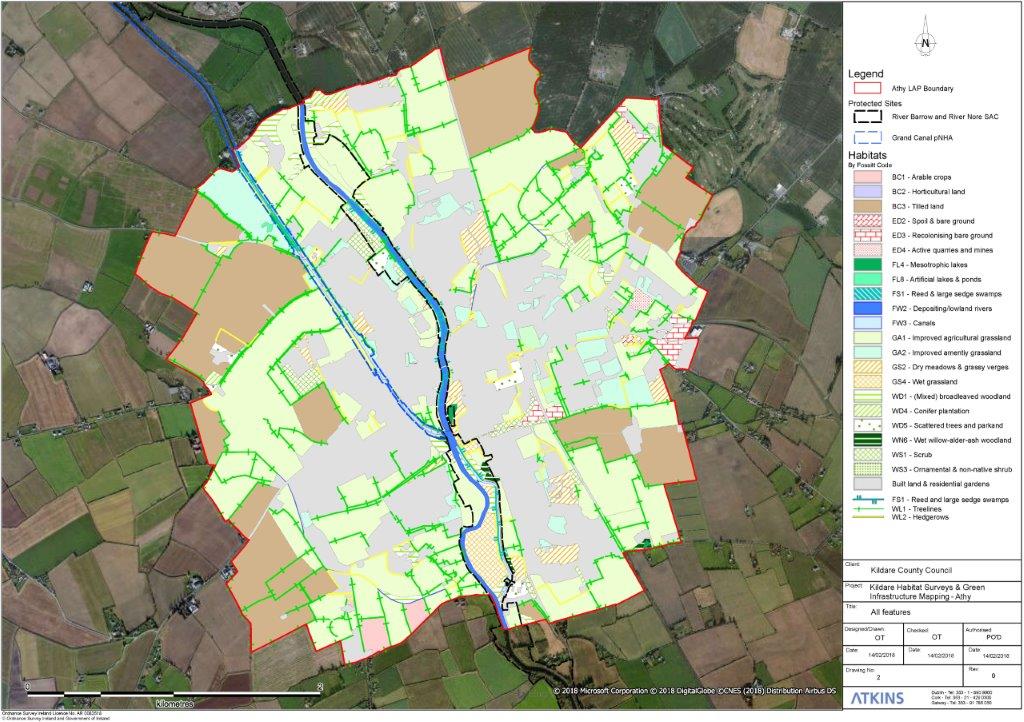 Open spaces form a vital part of the urban environment. Such amenity spaces create benefits not only for the enhancement of the quality of life of residential areas but also provide opportunities for recreational activities, education and biodiversity through the preservation and enhancement of green infrastructure as well as helping to mitigate the impacts of climate change. The existence of quality open spaces also improves the visual attractiveness of places to live and work; it helps to create a sense of place and identity and can improve the economic performance of a town by attracting visitors and inward investment.

A Social Infrastructure Audit was carried out to inform the Local Area Plan and to examine the availability and capacity of existing social infrastructure facilities in Athy and future requirements and to make recommendations based on anticipated population growth. The Audit was structured and carried out in the following manner;

There are 90.1 hectares of land zoned as ‘Open Space & Amenity’ within the plan area. These lands are used primarily for recreational and amenity purposes and represents 13.4% of the total area of the Plan.

Currently there is one Neighbourhood Park23, within the plan area (13.01 ha). This park comprises circa 19% of the total amenity open space provision in the study area. In addition to this neighbourhood park there is a local park (2 ha); green corridors (4.9 ha); sports areas (18.46 ha) and playgrounds (0.53 ha) with the remaining areas consisting of amenity green spaces and natural/semi-natural green spaces. The remaining spaces provide habitats for ecological purposes, a focal point for active and passive recreation, promote community interaction and help mitigate the impacts of climate change.

Using the UK’s Fields In Trust (FIT) recommended benchmark guidelines for ‘informal outdoor space’ it was determined that Athy would provide an acceptable amount of open space. Currently there are 21.96 hectares of sport and recreation area per 1,000 population which complies with the FIT benchmark guidance. While this would decrease during the course of the Plan to 1.61 ha per 1000 persons taking account of the projected increase in population, this figure would still comply with FIT standards.

The Kildare Open Space Strategy 201124 highlights that Athy currently has the full complement of public open space types and Athy currently exceeds this strategy’s recommended standard of 2 ha of open space per 1,000 persons. The population of Athy is envisaged to exceed 10,000 persons over the lifetime of this Local Area Plan. The open space Kildare Open Space Strategy 2011 therefore recommends two local parks are required ; one further local park is therefore proposed.

Furthermore, it was found that there is a significant shortage of play area facilities within the plan area. Play facilities, out-door gym equipment, benches and art installations should all be used to improve the quality of existing and proposed open spaces in Athy.

It was also noted there is currently a lack of sporting facilities in the western half of Athy. The proposed sports training hub (c. 5 ha) on Council owned lands at Ardrew is therefore welcomed. Whilst at an early stage of development it is envisaged the facility will be home to a range of active recreational activities and will have a number of training pitches.

There is an opportunity to enhance the green links between open spaces throughout Athy. These links vary in character from woodland and riverside/canalside walks to pathways within the urban context. These also have the potential to link historical points of interest. Many of the open spaces closer to the town centre and in the residential areas are also passive in nature. The introduction of amenities/facilities such as picnic tables, playgrounds or outdoor gym equipment should be considered and integrated into the existing open space network.

Amenity green space provision in Athy is over four times above FIT benchmark guidance. However, current playground provision is 0.055 per 1,000 people considerably short of the 0.25 FIT benchmark. Furthermore, it is noted the Kildare Open Space Strategy 2011 recommends that an additional 2-hectare local park in Athy with active uses is required once the population surpasses a population of 10,000 persons. These issues should be addressed within the lands identified as Natural / Semi-Natural Green Space in Figure 9.2. 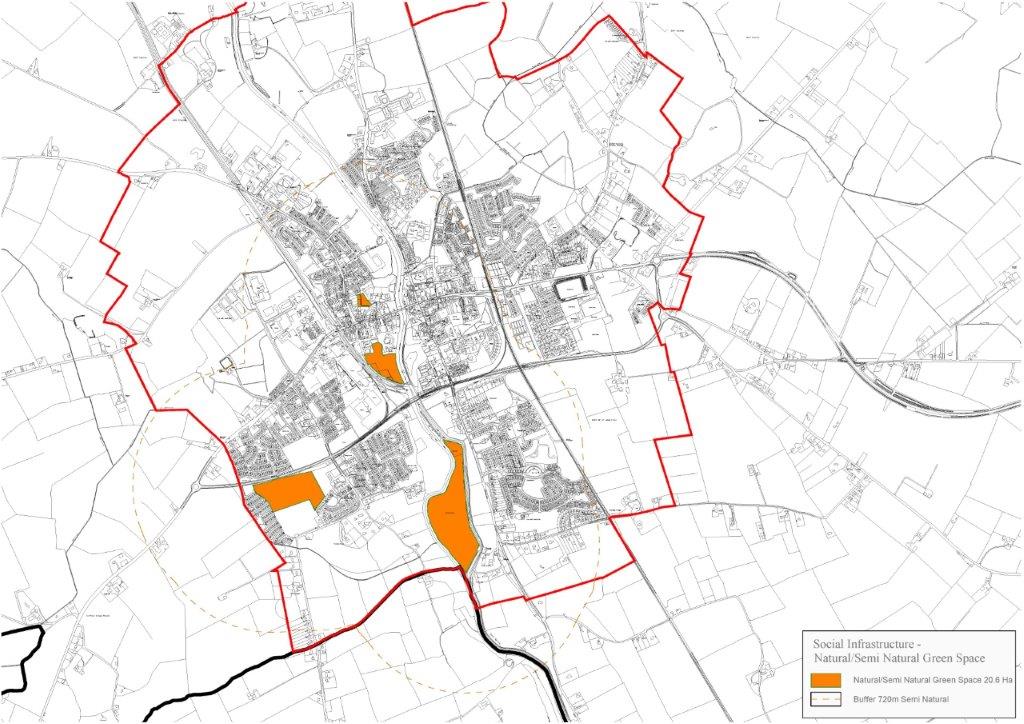 22. Any such green route or trail should be designed in accordance with the guidelines and principles outlined in ‘Planning for Watercourses in the Urban Environment’ (Inland Fisheries Ireland, 2020).

7 submissions have raised observations relating to this chapter