Under the provisions of the Local Government Reform Act 2014, Athy Town Council was abolished and it s functions, including those relating to planning and development were fully subsumed into Kildare County Cou ncil. Accord ingly, the Draft Ath y Local Area Plan 2021- 2027 has been prepared to replace the Athy Town Development Plan 2012 - 2018 as the key strategic planning document which will guide the overall development of the town in the period to 2027.

The Local Area Plan sets out an overall strategy for the proper planning and sustainable development of Athy in the context of the Kildare County Development Plan 2017-2023 (as varied), the Regional Spatial and Economic Strategy for the Eastern and Midland Region 2019-2031 and the National Planning Framework {2018 ). It is also info rm ed by Ministerial Gui delines issued under

The period of the Plan shall be taken as being six years from the date of its adoption or until it is reviewed, or another plan made, unless it is extended under section 19(d) of the Planning and Development Act 2000 (as amended).

1.2 Composition of the Plan

This Plan comprises a written statement with accompanying maps. The written statement shall take precedence over the maps should any discrepancy arise between them. In the full interpretation of all objectives for Athy, it is essential that both the County Development Plan (CDP) and the Local Area Plan be read in tandem. Where conflicting objectives arise between the CDP and the Local Area Plan, the objectives of the CDP shall take precedence. It should be noted that the general development management standards applicable to the plan area are included in the CDP. This Plan therefore provides policies and objectivesthat are specific to the future development of Athy.

The figure provided relates to the population within the settlement boundary of Athy in 2016. The boundary of this Plan follows, as far as pra cticable, the 2016 settlefnent boundary as defi ned by the CSO. For an explanation of what constitutes a 'set tlement boundary' and a 'built-up area' refer to Section 3.3.

1.3 Relationship with Other Plans and Guidelines

The Local Area Plan has been prepared having regard to national, regional and local policy documents, in addition to ministerial guidelines issued under Section 28 of the Planning and Development Act 2000 (as amended). The Plan also has regard (where relevant) to any Specific Planning Policy Requirements (SPPRs) contained in Section 28 ministerial guidelines as per the provisions of the Planning and Development (Amendment) Act 2018.

The Kildare Local Economic and Community Plan (LECP) 2016-2021 has also informed this Plan. The purpose of the LECP is to promote the local and community development of each local authority area, act as a roadmap for the development of the county and ensure the effective co-ordination of publicly funded programmes.


1.4 Office of the Planning Regulator

The Planning and Development (Amendment) Act 2018 provided for the establishment of an independent Office of the Planning Regulator (OPR). Under the provisions of the Act, the OPR have assumed the Minister's evaluation and assessment function of all statutory land use plans including local area plans. The OPR will provide statutory observations on all draft statutory plans to ensure consistency with relevant national and regional policies. Kildare County Council undertakes that all observations received from the OPR will betaken into consideration and commits to working with the Regulator to realise the most optimal planning and development outcomes within each respective plan area.

The preparation of the Local Area Plan included pre-draft consultation with the local community, statutory agencies and adjoining local authorities in 2018. The pre -draft public consultation extended over a five-week period (20th M arch- 24th April) and was accompanied by the publication of an Issues Paper which identified the key planning and development matters that the Plan could address and was made available for inspection at Athy Community Library, Athy Municipal District Office, Kildare County Council and online. The pre -draft process also included an informal public consultation evening held on Tuesday 10th April 2018 in Athy  Community Library. A total of 76 submissions were received from residents, service providers, local community groups, interested parties and elected representatives. These submissions have been taken into consideration during the formulation of this Local Area Plan. 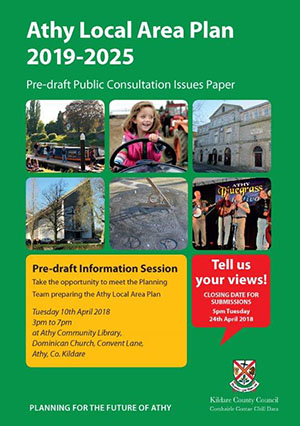 The Strategic Environmental Assessment (SEA) process is the formal systematic evaluation of the likely significant environmental effects of implementing a plan or programme before a decision is made to adopt the plan or programme. It informs the plan-making process of the likely environmental impacts of alternative actions and contributes to the integration of environmental considerations into the Plan. Under the provisions of the Planning and Development (Strategic Environmental Assessment} (Amendment) Regulations 2011, SEA is mandatory for plans for areas with a population of 5,000 persons or more; therefore, SEA is required for the Ath y Local Area Plan.

The requirements for Habitats Directive Assessment of plans or project s, is outlined in Article 6(3) and (4) of the European Communities (1992} Council Directive 92/43/EEC on the conservation of natural habitats and biodiversity ('Habitats Directive'). In any case where , following screening for Appropriate Assessment (AA), it is found that any plan or project is likely to have a signi ficant impact on areas designated as Natura 2000 sites, a full Appropriate Assessment must be carried out.

Athy Local Area Plan was screened for AA during its preparation at draft stage. This screening concluded that likely significant effects of the Local Area Plan on the integrity of the River Barrow and River Nore Special Area of Conservation (Site Code: 002162) could not be ruled out, and therefore full Appropriate Assessment wou ld be required. The mitigation measures identified in the Stage 2 Appropriate Assessment (i.e. Natura Impact Report [NIR]) have been incorporated into the Local Area Plan. The NIR has been published as a separate document alongside this Plan.

1.8 Approach Taken in Formulating this Plan

The Local Area Plan sets out an overall strategy for the proper planning and sustainable development of Athy in the context of the Kildare County Development Plan 2017-2023 (as varied) as well as the various national and EU legislative requirement s. In this regard an evidence-led approach has been adopted in the formulation of the Plan. Accordingly, the following data based documents have been prepared to inform the Plan and are published alongside the document:

The name Athy dates back to the 2nd century when Ae the son of Deargabhail was slain in a battle between the men of Munster and the men of Leinster. The battle was fought at a ford on the River Barrow called Ath-Ae, the Ford of Ae, which was later anglicised into Athy. The town itself developed as part of the Anglo-Norman settlement in Ireland. Woodstock Castle was built in the early years of the 13th century near the ancient river crossing of Ath-Ae. Indeed, Athy's strategic location on the River Barrow, at the edge of the Pale, was to a play key role in the development and consolidation of the town over the intervening centuries. The river was again to play an important role in the economic development of Athy with the opening of the Barrow Line Canal in 1791. This led to a boom in the trade of corn and resulted in the construction of warehouses and other facilities in the town. The opening of the railway followed in the mid-19th century and led to the further consolidation of the town. Despite this however, the extent of Athy's urban development remained confined to the area between the canal to the west and the rail line to the east. For most of the 20th century Athy remained a rural market town, though there was some level of industrial development with the opening of the asbestos cement factory in 1937.

The post-war period saw the gradual development of low-density residential housing to the north, east and south of the town. Such expansion accelerated rapidly during the 1990s and 2000s. This was to a large extent due to the town's accessibility by both road and rail to the jobs market of the Dublin Metropolitan Area as well as larger urban centres in the rest of the county- a position that has been reinforced with the opening of the M9 Motorway and the N78 motorway link.

Today, the town of Athy, despite having many of the characteristics of a commuter town continues to provide an important local employment base for south County Kildare. Indeed, Athy retains a vital role as a centre for jobs as well as retail, health and educational services for a wide hinterland area extending into the adjoining counties of Laois and Carlow .

1.10 Overview of Core Issues and Challenges

Table 1.1 (see overleaf) provides an overview of the key strengths, weaknesses, opportunities and threats (SWOT) affecting the spatial and economic development of Athy. This Local Area Plan acknowledges the current weaknesses and potential threats facing the town . However, in transitioning to a growth model of low carbon development whilst also focusing on improving quality of life issues, the aim now should be on developing the town's many inherent strengths which will be used as a basis to identify and realise opportunities and future possibilities for Athy.

Table 1.1: A SWOT Analysis of Athy

4 submissions have raised observations relating to this chapter