Aim: To protect, conserve and manage Athy’s unique built and archaeological heritage, by promoting the understanding, enhancement and appropriate development of these assets in order to instigate a heritage-led regeneration of the town.

Athy boasts a rich stock of architectural and archaeological heritage, a non-renewable resource that provides a high level of distinctiveness and character to the town. Such heritage refers to all manmade features in the environment including buildings and other structures such as bridges, monuments, archaeological sites, walls and street furniture. These structures and sites play an integral part in the life of the town and include places of work, commerce, worship, education and recreation. It is important that these heritage items are not viewed in isolation or as an impediment to development on account of their existence but rather form an inherent part of the townscape of Athy, which lends the town a unique ‘sense of place’ and offers great potential in providing for a place-based regeneration of the town.

As stated in the National Planning Framework (NPF) our ‘built heritage assets merit being nurtured in a manner appropriate to their significance as an aid to understanding the past, contributing to community well-being and quality of life as well as regional economic development.’ Accordingly, this Plan will seek to conserve and manage Athy’s heritage assets for the benefit of present and future generations and to promote such assets as generators of economic development and urban regeneration while adhering to the relevant statutory obligations.

The Planning and Development Act 2000 (as amended), places an obligation on local authorities to include objectives for the protection of structures, or parts of structures, which are of special architectural, historical, archaeological, artistic, cultural, scientific, social or technical interest.

Archaeological structures may, in some situations, be considered as architectural heritage and, therefore, may appear on both the Sites and Monuments Record (SMR) and the Record of Protected Structures (RPS). The RPS, which includes structures in Athy, is contained within the Kildare County Development Plan. Map 3: Built Heritage and Archaeology and Map 3a: Built Heritage and Archaeology – Town Centre illustrate the location of protected structures in Athy. Most of these structures are also identified in the National Inventory of Architectural Heritage (NIAH) as being of regional importance.

Table 8.1 is an extract of the Record of Protected Structures and is reproduced in this Plan for information purposes only.19 There are 150 protected structures located within the area covered by the Local Area Plan. These structures merit protection and enhancement and in many cases have been identified by the National Inventory of Architectural Heritage (NIAH) for that reason. The NIAH for Kildare was completed in 2003 and the entire Record of Protected Structures in the county was last reviewed in 2015. It should be noted that the consideration of any additions or deletions to the RPS is addressed outside of the local area plan-making process and must have regard to the relevant planning legislation and guidelines including the ‘Architectural Heritage Protection: Guidelines for Planning Authorities’ (DoAHG, 2011).

An Architectural Conservation Area (ACA) is a place, area, group of structures or townscape that is of special architectural, historical, archaeological, artistic, cultural, scientific, social or technical interest or value, or contributes to the appreciation of protected structures. The Planning and Development Act, 2000 (as amended) provides the legislative basis for the protection of such Architectural Conservation Areas (ACA). An area in the historic core of Athy has been designated as an ACA in the Kildare County Development Plan. While the purpose of this designation is to protect and enhance the special character of the area, this does not preclude appropriate forms of development, including the construction of new build from happening.

As part of the preparation of the Plan, a Statement of Character for Athy ACA was also commissioned by Kildare County Council. This is also an objective of the Kildare County Development Plan 2017-2023 (Objective ACAO2). The purpose of the Statement, (which has been published alongside this Plan), is to define the special character of the Athy ACA and to provide guidance to property owners, developers, architects and planning professionals on important features and characteristics of the area and the type of works that would require planning permission within the ACA.

Another piece of work undertaken, as part of the preparation of the Statement of Character, involved a review of the current boundaries of the ACA, having assessed the special character of the town. On the basis of this review, the Statement of Character has made recommendations to include or exclude certain areas from the ACA20 and will, if adopted, be amended through the review process of the Kildare County Development Plan. The proposed changes are illustrated in Figure 8.1.

It is also the intention of the Council that an accompanying information/guidance booklet be prepared and be circulated to property owners, the general public and Kildare County Council service departments on the type of works that would require planning permission within the ACA while making specific recommendations on how to improve/restore the character of the ACA where required.

The rationale for the designation of the ACA for Athy includes inter alia: 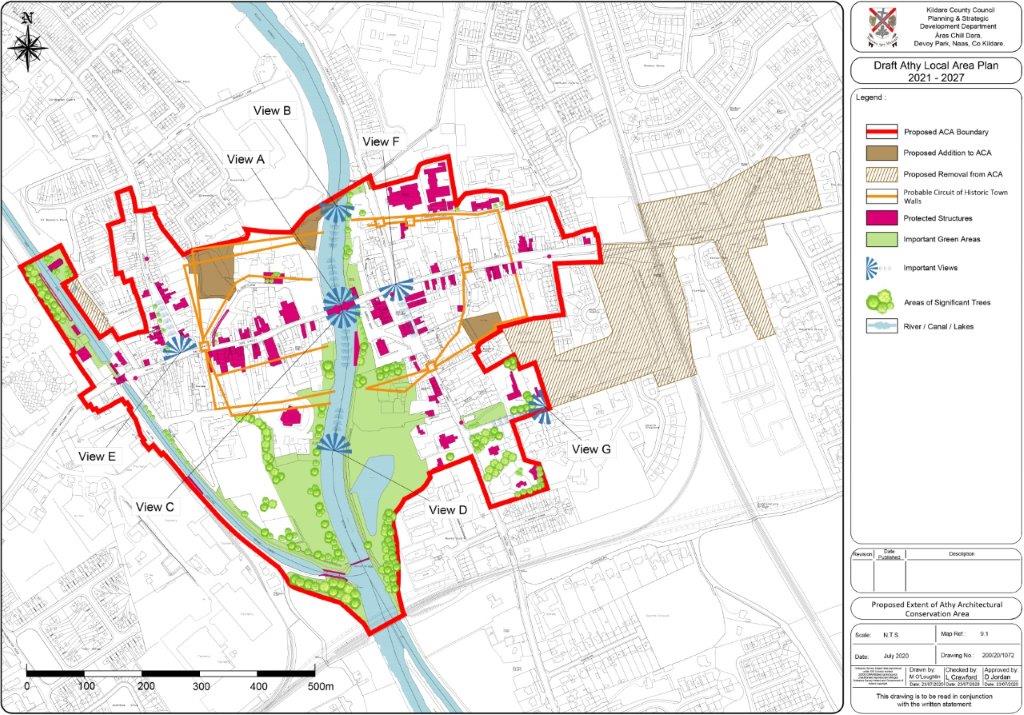 8.3.1 Management of Development in the Architectural Conservation Area

The Athy ACA Statement of Character shall act as a guide for homeowners, developers and the Planning Authority to inform proposed development proposals in the ACA. Owners and occupiers of non-protected structures located with the ACA should note that carrying out of works to the exterior of a structure located in an ACA constitutes exempted development only if those works would not materially affect the character of the area. For example, alteration works to streetscape features such as roofs, walls, windows, doors and rainwater goods may not be exempted development.

Porches and other development, which may normally be considered exempt, are consequently not exempt within the ACA.

Applications for infill development within and contiguous to the ACA, and also modifications to existing or new shopfronts should also have regard to Section B of the ACA Statement of Character, and include: a study of the overall façade; an analysis of how the development complements the setting; the removal of visually intrusive elements such as inappropriate signage, lighting and ancillary cables and ducts, and the use of appropriate materials.

Whilst it is noted that the Kildare County Development Plan does not include views to be protected within the Plan area, the Statement of Character for the Athy ACA outlines a number of key views/prospects which are deemed to be worthy of protection (see Figure 8.1). Such views should be taken into consideration when developing sites within the ACA.

Table 8.2: List of views outlined in the Athy ACA Statement of Character

Whilst Athy can trace its origins as a settlement back to medieval times there is a diverse range of archaeological features found throughout the town, with representative monuments and artifacts of all periods. Archaeological finds dating to the Neolithic and the Bronze Age attest to the importance of the crossing over the River Barrow from prehistoric times. Little of Athy’s medieval origins remain apart from the presence of structures from this period such as White Castle located on the east bank of the River Barrow adjacent to Cromaboo Bridge; the ruins of St. Michael’s Church at the edge of the town and a wall of St. John’s Hospital bounding the medieval graveyard on John’s Lane. The sense of the Athy’s medieval origins is retained by the street pattern and distinct building line along the Main Street creating a sense of enclosure of medieval character.


For the purposes of the Local Area Plan, Archaeological Heritage includes the following:

Athy was once a fortified town; however no above ground evidence of the town defences exists today. The County Kildare Urban Archaeological Survey (Bradley and King 1986) suggests the line of the town defences, including any subterranean remains should be protected. In this regard the Statement of Character for the Architectural Conservation Area (ACA) proposes to alter the boundaries of the ACA so that they follow the probable circuit of the town walls (see Section 8.3). Furthermore, as per Objective AO2 of the County Development Plan a Conservation, Management and Interpretation Plan has been prepared to aid the development of planning policy and guide the conservation of the medieval heritage of Athy. It should be noted that the town walls and other subterranean other defences are categorised as ‘National Monuments’ (rather than ‘Recorded Monuments’) under the National Walled Towns Policy (DAHG 2008).

Map 3: Built and Natural Heritage identifies the sites within the Plan area that are included on the Sites and Monuments Record (SMR). This map should be read in conjunction with Table 8.2 (see below) which lists all the relevant sites, and which has been reproduced in this Plan for information purposes only. The Archaeological Survey of Ireland database at www.archaeology.ie contains an interactive map/search facility that provides access to all records of the Archaeological Survey of Ireland (ASI) and should be consulted prior to the development of land within the Plan area. The SMR for Athy is continually updated as new information becomes available and new sites are uncovered.

Some archaeological structures within the town may, in some situations, also be considered as architectural heritage and may therefore appear on both the Sites and Monuments Record (SMR) and the Record of Protected Structures (RPS). Such structures are therefore protected by both the National Monuments Acts and the Planning and Development Act 2000 (as amended).

As noted in Section 8.4.1 Athy was once a walled town and is one of four towns in the county that are members of the Irish Walled Towns Network (IWTN). Within the Zone of Archaeological Potential there is a significant potential of uncovering archaeological remains, including the circuit of the town walls. Therefore, developments located within a Zone of Archaeological Potential and/or close to known archaeological monuments or sites, including site works that are extensive in terms of area (ground disturbance of 0.5 ha or more) or length (1 kilometre or more) and developments that necessitate an Environmental Impact Assessment Report, will be required as part of the planning application process, or by condition of permission, to carry out an archaeological assessment, monitoring, testing or excavation within the area either prior to the planning decision or prior to any development proceeding on site. The Council, as a condition on such developments, may consider the preservation of all, or part of the archaeological remains in the area covered by that permission.

The Council will engage with the Department of Housing, Local Government and Heritage and other statutory consultees when considering applications for planning permission for development on or in the vicinity of archaeological sites and/or monuments.

19 For the full record of protected structures in the county please refer to the Kildare County Development Plan.

2 submissions have raised observations relating to this chapter